19/04/2022
Unfortunately the abstract isn't available in English yet.
Alert lists contain alien species not yet present or with very limited distribution that potentially impact on biodiversity. Such lists have multiple purposes in a proactive response towards alien species. They are used to direct surveillance effort and to raise awareness through risk communication. Provided they have a transparent evidence base, they can justify preventive action aimed at reducing presence in trade or restricted use of species. Lastly, they can trigger rapid response actions.
We outline a workflow to draft alert lists of potentially invasive aquatic and riparian plants and crayfish in Belgium. First, we scanned online trade catalogues of wholesalers and e-shops and performed interviews with plant sellers and aquarist shop owners. This yielded a longlist of 203 alien plants and 40 alien crayfish in commerce. Second, we used open data from the Global Biodiversity Information Facility and Köppen-Geiger climate maps to perform climate matching. We selected species with minimum 20 records in one or several climate classes corresponding to current (Cfb, Dfb) or future (Cfa, Cfb) climate in Belgium. This resulted in a list of 152 plants and 3 crayfish able to establish in the country under current climate, 163 plants and 11 crayfish under future climate. Third, the shortlists were subjected to broad-scale risk assessment using the established risk assessment scheme Harmonia+. This yielded short lists of high risk (alert) species (10 plants, 3 crayfish), low risk species and also flagged data deficient species. This workflow can be applied to any species group in commerce at national level.
The alert lists will be used within the Life project RIPARIAS (Reaching Integrated and Prompt Action in Response to Invasive Alien Species) to draft identification sheets, train inspectors and managers and initiate rapid responses. This work received funding from the LIFE Programme of the European Union (LIFE19 NAT/BE/000953). 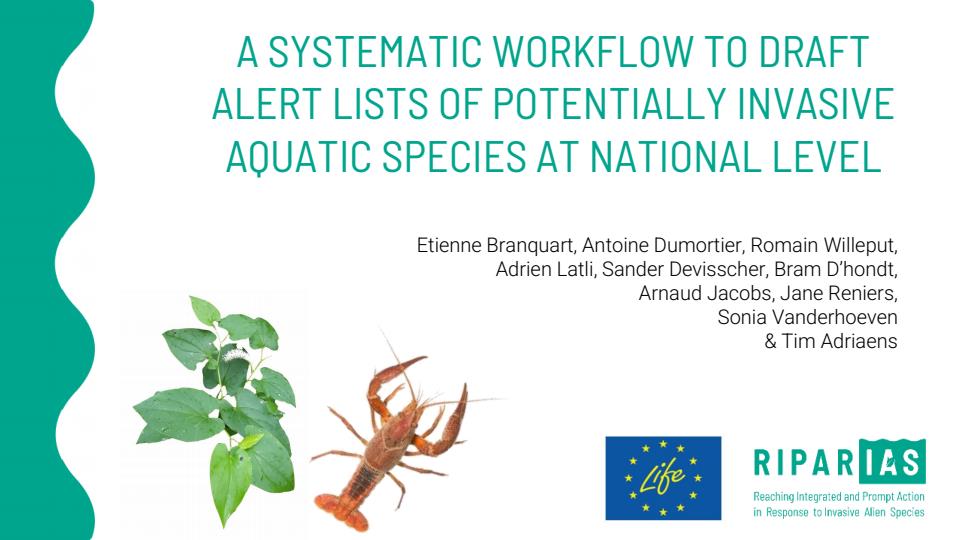