Diversity, Status and Phenology of the Dragonflies and Damselflies of Cyprus (Insecta: Odonata)

25/10/2021
Unfortunately the abstract isn't available in English yet.
Based on literature data, unpublished material and the results of the year-round monitoring at selected sites island-wide by the Cyprus Dragonfly Study Group since 2013, we acquired an excellent knowledge of the diversity and status of the Odonata of Cyprus. Altogether, 37 species are on the island’s checklist. Ischnura pumilio, Aeshna affinis and Brachythemis impartita were only very rarely recorded in the past but are considered to be no longer present. The single record of Calopteryx virgo from 1930 is in our opinion a misidentification and has been removed from the checklist. The island has a rather impoverished odonate fauna compared to neighbouring countries. There are no endemic species, but the island is home to some range of restricted species of which Ischnura intermedia is the most important. Flight seasons determined for the 31 species with sufficient data were generally found to be longer than reported for other countries in the Eastern Mediterranean. This may be due to intensive year-round monitoring but could also result from Cyprus’ warmer climate. Very wide annual variations were found in the abundance of all species over the seven years and show an almost immediate response to the wide fluctuations in Cyprus’ annual rainfall levels. 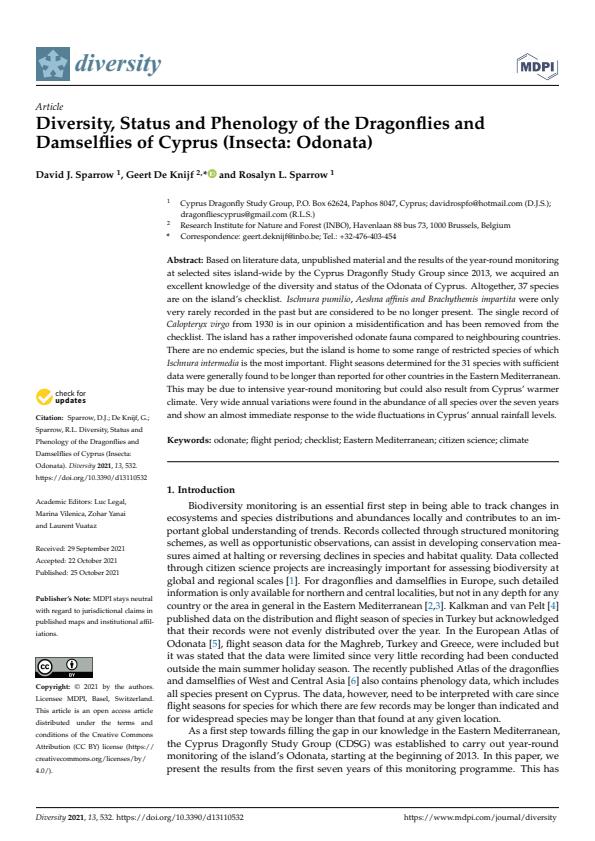