05/07/2021
Context
Terrestrial landscapes surrounding aquatic habitat influence the persistence of amphibian spatially structured populations (SSPs) via their crucial role in providing estivation and overwintering sites, facilitating or hampering dispersal and colonisation, and consequently the maintenance or loss of genetic diversity.
Objectives
To highlight the landscape drivers of genetic variation, we investigated the relationship between the level of genetic variation measured within ponds of the great crested newt (Triturus cristatus), and the composition of the surrounding landscape at various spatial scales.
Methods
Based on the sampling of 40 ponds in thirteen SSPs, the influence of landscape features on several estimators of genetic variation was investigated via linear mixed models, with effects within and between SSPs incorporated.
Results
The best models depended on the spatial scale, with more significant associations within radii of 50 and 100 m of core ponds, particularly for allelic richness. Responses within and between SSPs were mostly similar. The availability of aquatic habitat in the landscape had a positive effect, while woodland, arable land and pasture had different effects depending on scale and response variable. Total length of roads within a 250 m radius influenced effective population size negatively.
Conclusions
Our results stress the need to investigate the influence of environmental predictors at multiple spatial scales for an adequate understanding of ongoing processes. Generally, the landscape affected genetic variation similarly within and between SSPs. This allowed us to provide general guidelines for the persistence of great crested newt populations, with an emphasis on the importance of the aquatic habitat. 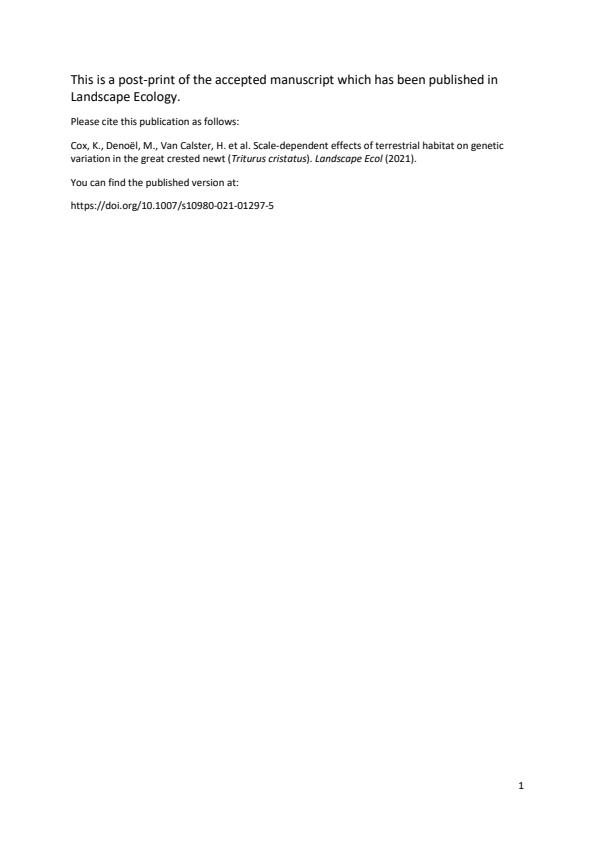