28/05/2021
The invasive American bullfrog (Lithobates catesbeianus) imperils freshwater biodiversity worldwide. Effective management hinges on early detection of incipient invasions and subsequent rapid response, as established populations are extremely difficult to eradicate. Although environmental DNA (eDNA) detection methods provide a highly sensitive alternative to conventional surveillance techniques, extensive testing is imperative to generate reliable output. Here, we tested and compared the performance of two primer/probe assays to detect and quantify the abundance of bullfrogs in Western Europe in silico and in situ using digital droplet PCR (ddPCR). Although both assays proved to be equally target-specific and sensitive, one outperformed the other in ddPCR detection resolution (i.e., distinguishing groups of target-positive and target-negative droplets), and hence was selected for further analyses. Mesocosm experiments revealed that tadpole abundance and biomass explained 99% of the variation in eDNA concentration. Because per individual eDNA emission rates did not differ significantly among tadpoles and juveniles, and adults mostly reside out of the water, eDNA concentration can be used as an approximation of local bullfrog abundance in natural populations. Seasonal eDNA patterns in three colonized ponds showed parallel fluctuations in bullfrog eDNA concentration. An increase in eDNA concentration was detected in spring, followed by a strong peak coinciding with the breeding season (August, September or October), and continuously low eDNA concentrations during winter. With this study, we report the validation process required for appropriately implementing eDNA barcoding analyses in lentic systems. We demonstrate that this technique can serve as a solid and reliable tool to detect the early stages of bullfrog invasions and to quantify temporal changes in abundance that will be useful in coordinating large-scale bullfrog eradication programs and evaluating their efficiency. 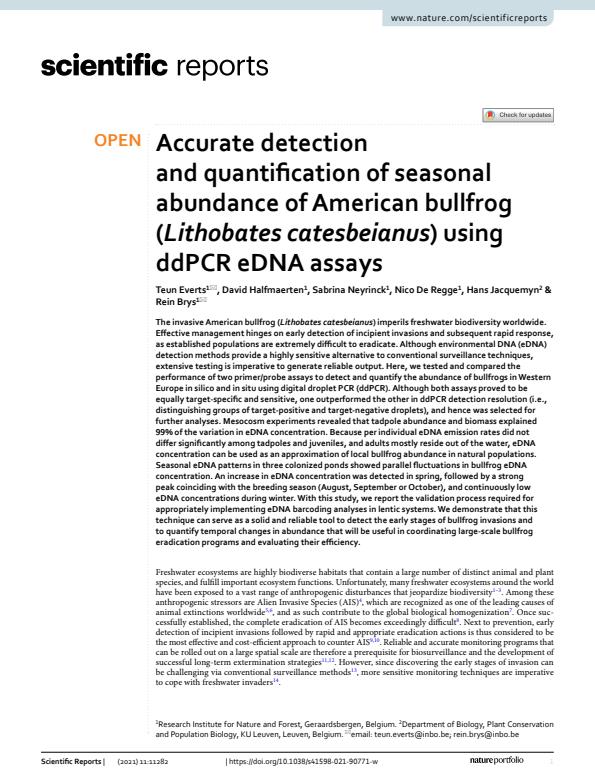